First up are we going to actually have an El Niño? The question on everyone’s lips. The answer to this is still not clear at all, primarily because the models have converged and made their consensus. For example, the NMME forecast, featuring the main North American ENSO ensembles, go from a full on Niño with CFS, to the CMC models that show a borderline Niño at best, to the NASA model, that is pretty stagnant and stays warm neutral. 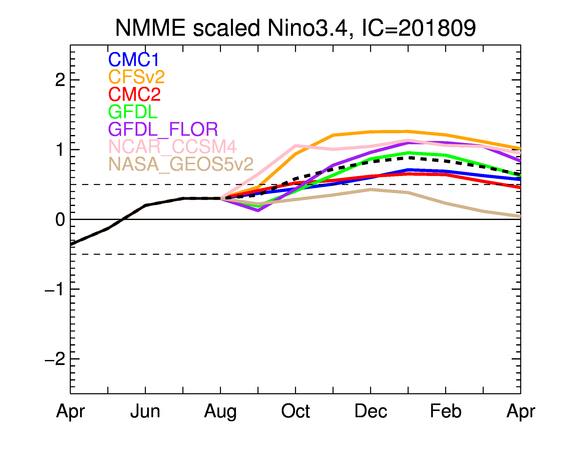 In contrast, the JAMSTEC model shows a fully strong Niño event. Which I think has been consistently forecasting for a while.

To add to the above models, the ECMWF shows a fairly weak EP El Niño, and the Met Office (UKMET) forecasts a slightly stronger, perhaps moderate El Niño event. The brand new ACCESS (developed from the same core as the UKMET’s) model shows an El Niño developing.

The latest SSTAs from Niño 1+2, Niño 3 and Niño 4, that show a warm neutral Niño not really moving anywhere, are we going to move towards an El Niño? Many of the above models do take into account this neutral period, and still come out with a fairly strong El Niño event. One of the more interesting trends to examine with these graphics, is that Niño 3 (more Eastern Pacific) is much more neutral than Niño 4 (more Central Pacific). So with this in mind, it would seem that it would be easier to reach Central Pacific Niño or Modoki Niño. One thing all the models (that I have examined) are clear on is that we aren’t going to see cold Niño 1+2 SSTs. Most show warm neutral and often Niño level warmness in the region. This shows that we may be in for warming across both the Eastern Pacific and Central Pacific regions in general. This is a sentiment echoed in my last blog update here:

“During a true Niño Modoki, you see cooling around the South American coast at the equator, this doesn’t happen here. Yes it is weaker than the warm anoms further out into the Pacific, but they aren’t cooling. This is why none of the Modoki index forecasts I have seen show this as a proper Modoki, because of the warm Niño 1+2 anomalies off South America. This is why I think this event carries both hallmarks of ENSO in various ways, as we all know, no two ENSO events are alike.”

The warm subsurface temps are around the Dateline in the observations over NH summer. But CFS shows them moving up (as expected), but also eastwards. And we have started to see this a little bit this month. This creates a warm NIÑO 3 (Eastern Pacific) and NIÑO 4 (Central Pacific).

So maybe a bit of both? If we manage to get one for the most part…. We are starting to see some movement in the last month or so, from the atmosphere, in this example from the SOI and Dateline cloudiness.

SOI is moving more negative since June, an indication of a move towards Niño. 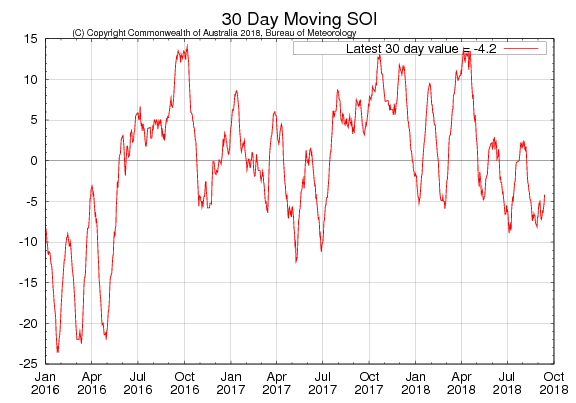 And Dateline cloudiness starting to shift towards negative OLR values which are associated with an Niño event. But from both of these indicators, we really need a follow through towards Full Niño. 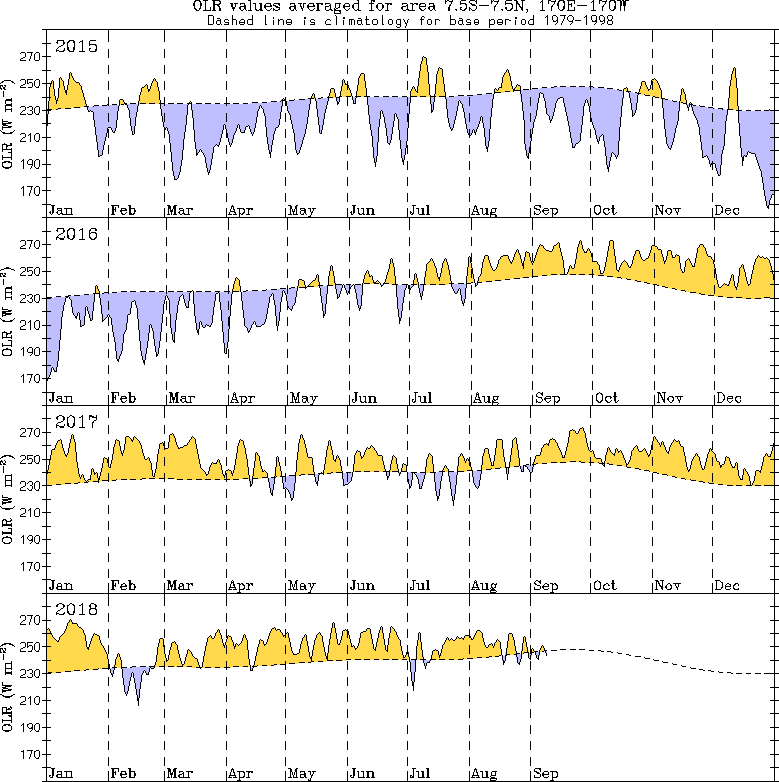 Another indicator, the AAM or Atmospheric Angular Momentum has also been noticeably Nina-esque, as noted by this Victor Gensini chart. -AAM correlates with a generally Nina like atmosphere. And remember that there is a difference between the Atmospheric Niño indicators and the Oceanic Niño factors, because they are sometimes not correlated to each other. 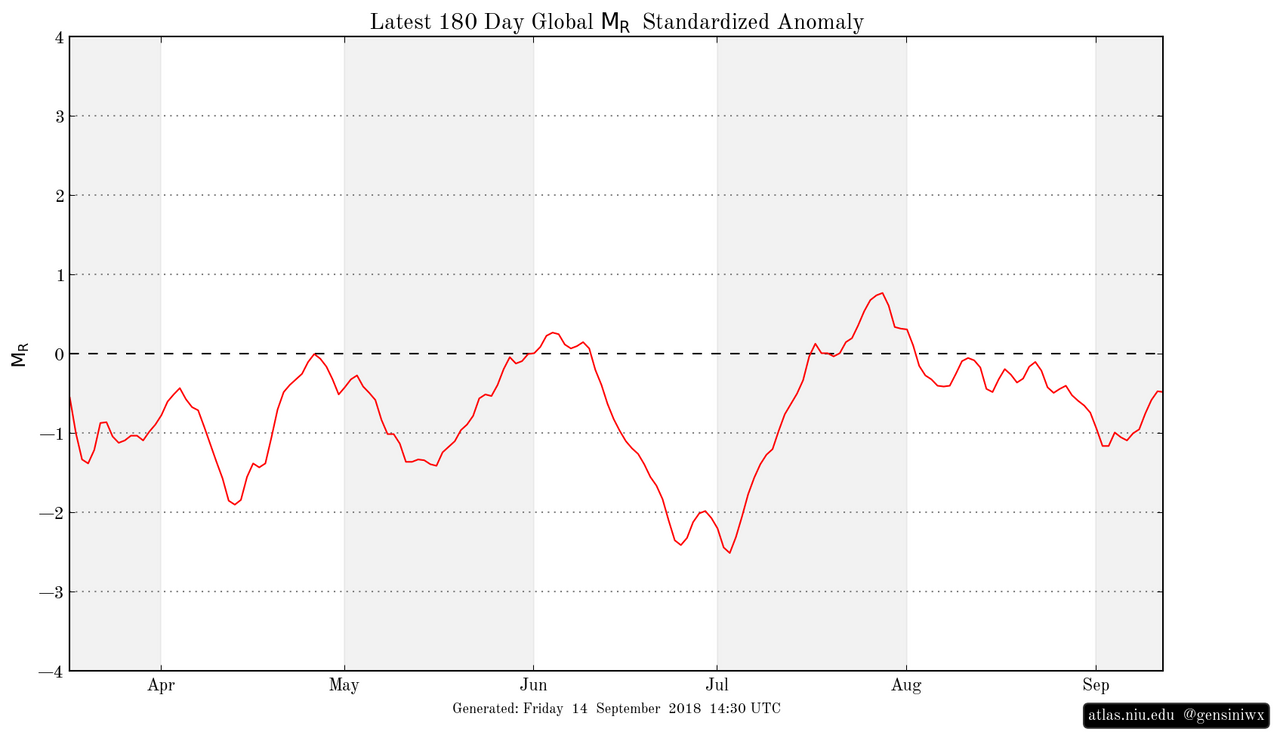 It has been slightly heading positive over a monthly timescale, but still fairly negative moving towards neutral (much to the denial of CFS and Bias Corrected GEFS at the moment). Trade winds are also neutral, with several WWBs in the Pacific over the last few months, but now we are heading into a period of big easterly trades in the Central Pacific region in particular. You want weak/westerlies for an El Niño.

This all shows us that we are a long way from any form of a Niño, not until November at least. And my tip is for a warm Weak El Niño in both the Eastern Pacific and Central Pacific regions. This could aid a -AO and Eastern troughing, while also giving California it’s big snow dosage. But on the other hand, my other tip is for the atmospheric enso factors to stay warm neutral, and the GWO/AAM to stay neutral with entrances to both +AAM (Niño) and -AAM (Nina) territory. This could make for a very interesting up and down winter for all regions IMO﻿.﻿﻿﻿﻿﻿﻿﻿﻿﻿﻿﻿﻿﻿﻿

StratosphereJust a bit of check in for this factor, the full explanation was in the last blog update. 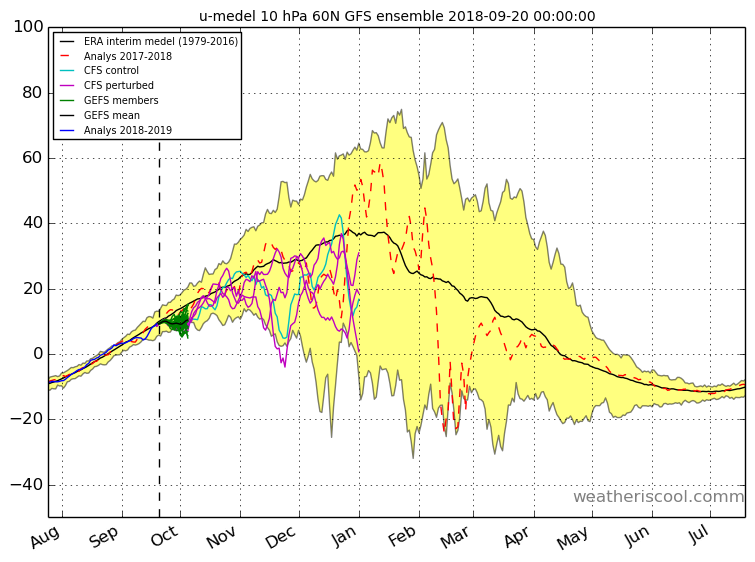 The new CFS forecast shows the forecast for a weaker than average Stratospheric Polar Vortex continue into early winter. This means that a -AO could manifest in the troposphere and create good snowfall conditions for Japan, Eastern US and Europe.

SunspotsLast time I briefly mentioned this, but I wanted to quickly demonstrate this with the sunspot chart.

We are currently in a solar minimum, by all measures and this is forecast to peak around this winter. I have been doing some analysis into the relationship between sunspots and the AO, and you can see a trend towards less sun activity = more negative AO. 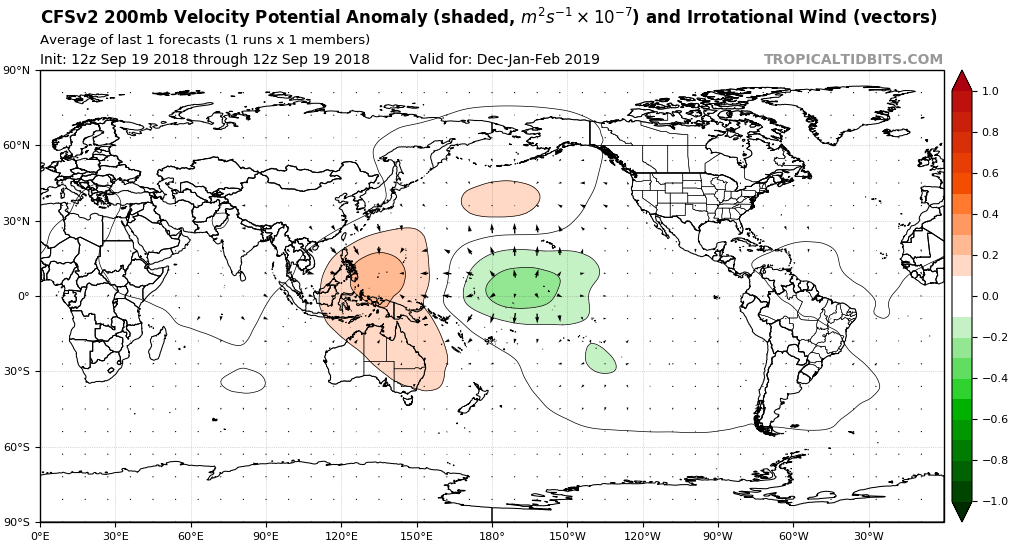 We see a continued pattern from CFS showing a Phase 7-8-1 MJO setup across winter 2018-19, bringing more snowfall to the Eastern US. Phase 3 is more helpful for Western US and a -NAO setup in the Atlantic. The latter is caused from the downstream effect of Eastern US troughing and the setup behind that. 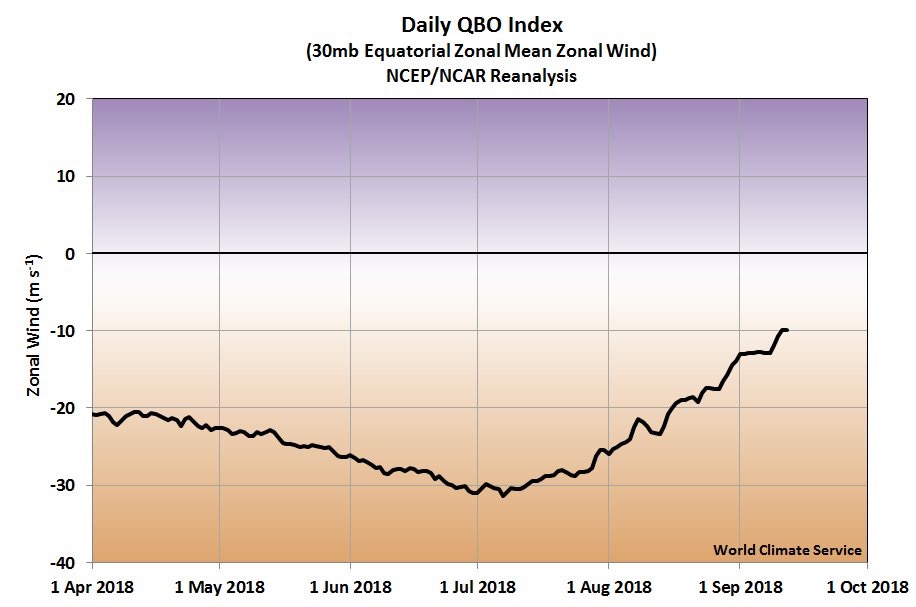 Now we are trending very quickly towards a +QBO, at least from 30mb, so expect positive or westerly phase of QBO over winter, with maximum impacts over late winter. This can help induce a +AO setup, which would assist snowfall for the West Coast of US, and not so much Japan, Eastern North America and Europe.

My other forecasts for the PDO and Snow & Ice factors remain the same as last update, for now. Check into the blog in two weekends time for the big October preliminary forecast, before we start getting into the Outlooks mid-late October. The next update will be much more of a forecast, than today’s more technical update.

Thank you so much for reading this seasonal outlook for the Northern Hemisphere.

Seasonal outlooks tend to have bias and errors, due to the fact that these forecasts are so far out. So don’t use these outlooks to make important decisions. These outlooks are meant to be interesting information, that can help to see what the season might be like.