GFS shows a system beginning with moderate snowfall from a front in the PNW on the 3rd and 4th, before it really starts ramping up on the 5th, 6th through to potentially the 8th and 9th, with heavy snowfall up the BC and PNW Coast, all the way to Tahoe.

EC Monthly shows a weak trough bringing light-moderate snowfall for BC on the 10th, moving down to the Inland PNW states on the 11th, and then down to CO/UT on the 12th, before ramping up with added moisture on the 13th and 14th, over NM, AZ and South CO/UT, bringing moderate-heavy snowfall, fading later on the 14th. 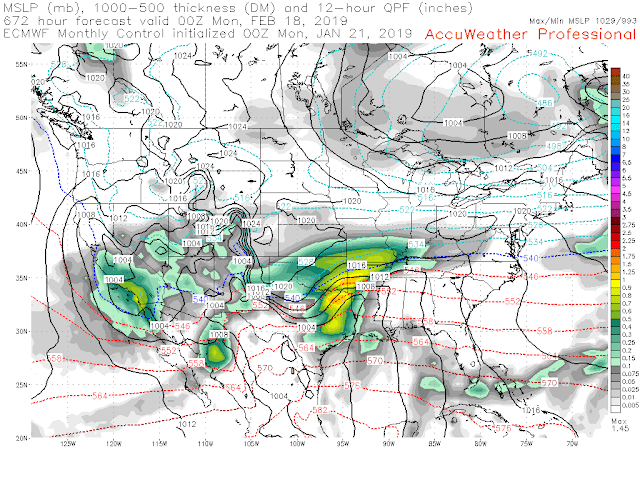 EC Monthly brings a low bringing heavy snowfall to Tahoe at first later on the 16th. Moderate-heavy snowfall spreads to CO/UT/AZ/NM, and continues through to the 17th, before weakening through the 18th to lighter snow showers.

The previous system lingers, bringing cold conditions and with a moisture injection, moderate-heavy snowfall for CO/UT/AZ/NM from the 20th, 21st, before moving on over the 22nd of Feb on EC Monthly.

The MJO is currently in Phase 4, heading through Phases 5 & 6. These phases are pretty good for Western US, in terms of snowfall, and with a lag they can help create troughing for the Western US, but they need some help in terms of extratropical support. Once the MJO moves into Phase 7 and weakens to the COD in the first days of February, this influencer will start to favour the Eastern US in terms of snowfall and troughing.

Once again, the significant earth AAM contribution to the total AAM is not seen on the GWO, so people may not see the full proportions of the westerly momentum we have going, which you can see in the extended NP jetstream, and the general sense of more added momentum. This is going to reduce over the next week or so, so you are going to start to see some more movement in the jetstream, bringing systems to BC/PNW on the 30th/31st of Jan, and this theme continues in the GFS run you see above into the first week of Jan. But longer term, we should start to see +AAM back up again in the second and third weeks of Feb, and this coupled with a weakening in the MJO, and a general stronger Aleutian Low structure, should see more systems angled towards the Four Corners region and SoCal. But particularly this looks like a big period for the Eastern US, with more accessibility to the moisture that NWP says that there is plenty of, off the Pacific Coast. The Eastern US should see a good period of troughing for the next 10 days with the TPV around. Then a relaxation from a slower Pacific pattern, allowing a more fluid setup from say the 5th to the 10th, maybe a tad earlier based on the latest EPS suite. And then we should see it pretty good for the rest of the month, before it easing at the end of the month into March.

This above graphic shows the retracting North Pacific jetstream in the last days of Jan and the first ones of Feb.

A stronger SPV, has assisted downwelling of a -AO signal, which is now being received and assisting with the push of the TPV into the Eastern states. This process will continue, and we should start to see a -NAO signal in the first week of February, ready for the big period for the Eastern US in the middle two weeks in February. 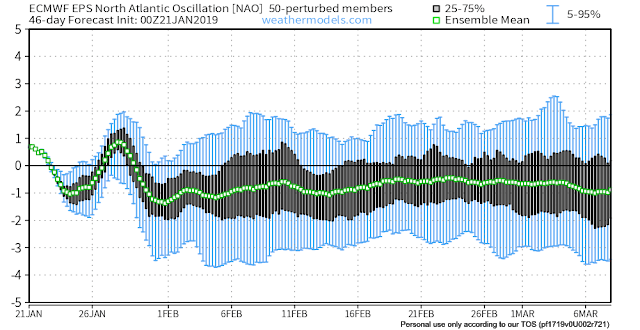 FWIW, CFS shows a strong -AO signal, but a more neutralised NAO signal. It’s still out there for contest, but I still think there is significant ground for a -NAO into February.

So IMO, the BC/PNW (+ Tahoe and Inland PNW) should see a good period from the 30th Jan to the 10th of Feb. Then the focus shifts south to CO/UT/AZ/NM from the 10th onwards, however as the month progresses there may be a strong +PNA ridge in the West. The Eastern US sees a relaxation (I won’t call it a proper break, because systems can still happen) from the 4th to 10th Feb, and then a good period for snowfall (probably more than the current short term forecast) until the end of Feb.

Thanks so much for reading. I hoped you enjoyed reading it.