Hello to you all, this will be the final update to my Japanese long term forecast. Verification of the seasonal outlook is down the bottom. Enjoy 🙂

A deep low approaches Honshu, and brings rainfall for Central Honshu over the 5th, and eases over the 6th, with a potential few hours of snowfall as it moves away. 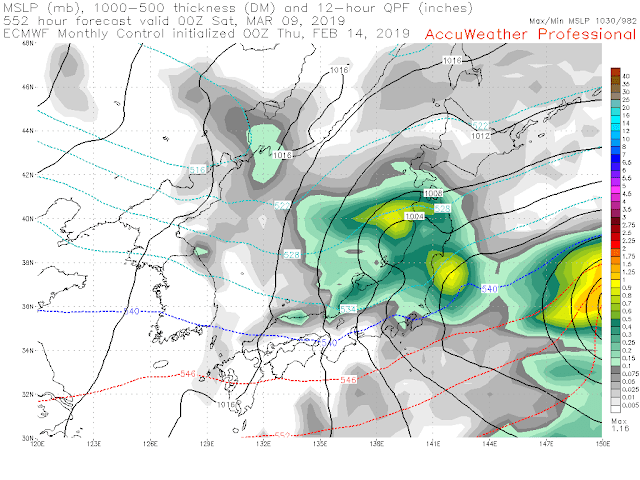 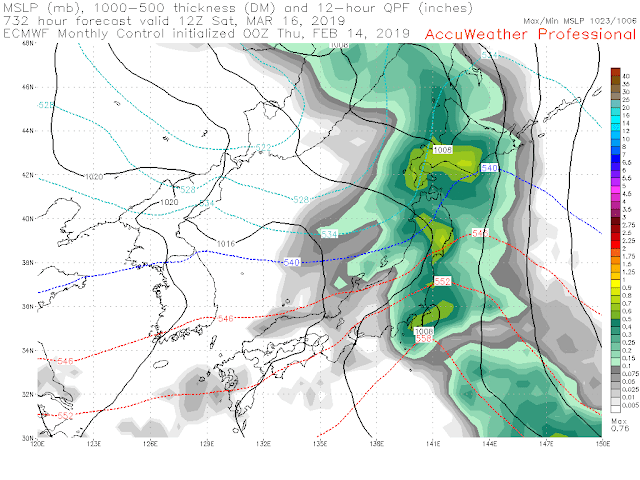 A low on EC Monthly drags across Honshu bringing rainfall there on the 18th and 19th. From early on the 19th, heavy snowfall occurs on Hokkaido until later that night.

A weakening Siberian High and Aleutian Low means that the processes that generate the snowfall in the winter are decaying. Without a strong Siberian High pushing cold winds into Honshu, the snowfall decreases. EPS and GFS are looking at some South Siberian/East Asian ridging that supports some cold coming down to Japan, helping it snow off the back of low pressure based systems for Hokkaido and higher parts of Honshu.

Overall low pressures stemming off the South China region are beginning producing rainfall events for Honshu. A +EAMT period is currently occurring, and this should continue for the next 8-10 days. The Day 9-15 period on EPS shows a -EAMT heading into March. Once this occurs, this would stop most sea effect snowfall heading deeper into March, as it typically does. The lower heights in Siberia has disrupted the Siberian High, but may bring low pressure snowfall to Hokkaido in the next 20-30 days. But I expect most precipitation will be brought by a more poleward jetstream up from South China.

The next 15 days in terms of snowfall should be fairly average, with more rainfall expected, but it should largely be snow in Hokkaido and up high in the Honshu mountains. This is helped by a currently MJO Phase 7 with it’s lag period in the next week. But it will get worse into March unfortunately. The last week of Feb should see a high over Japan, bringing a string of days with sun.

Let me bring you back to the forecast I made back in November.

“It doesn’t look that great, but it isn’t a complete nightmare. The models paint a poor picture for Hokkaido, and an even worse picture for Central Honshu. It’s hard to be definitive with ENSO this year, but it will probably have a modest negative effect. The AO and SSTs help Hokkaido, with the former helping Central Honshu out, and the latter reducing it’s snowfall chances. My forecast is for Hokkaido to have a slightly above average snowfall season, and Central Honshu to have a slightly below average season IMO.”

Switch Hokkaido and Central Honshu around and the forecast sounds about right. I underestimated the positive influence of the +EAMT, which partially outweighed the more conflicting polar factors. The season overall did a little better than what I thought it would be.

Thanks so much for reading. I hoped you enjoyed reading it.

Thanks again for reading this Japanese long range snow forecast, follow me on Twitter @longrangesnow and subscribe to my email list by clicking on the tab on the main header above. It has been a pleasure to be forecasting for everybody who checked in during the season. The Australian winter outlook will be heading your way in April. Until then, or next Northern winter, have a great summer in Japan!